I came away, abandoning
the Thousand-Year-Old Cedar
dandled by the storm

A slippery sex organ
and another
give birth to gold

On television
a large root dances
Manhattan below zero

Every man faces in two directions. To the past, he stands as a forebear. To the future, he stands as standard bearer. In either stance, he is an interpreter, for the past is always contested and the future is the temporary outcome. Every man is a modernist, in other words, willingly or no. Only those who know this are artists. The rest are dogmatists or iconoclasts.

The reissue last year (2004) of A Future Waterfall: 100 Haiku from the Japanese, by Red Moon Press, seen in this perspective, is an event of singular importance. It signals the success of the work. This signals that the reshaping of the past in terms of the present as performed by Mr. Natsuishi has struck a chord- atonal and sometimes discordant- in a wide audience. The question remains, though, as to what accounts for Mr. Natsuishi’s widening influence in the world of modern poetry.

Though it is not the centerpiece of the book, or its best poem, the following poem might well stand as the book’s credo:

I came away, abandoning
the Thousand-Year-Old Cedar
dandled by the storm

The poem works almost exclusively by allusion to a poem of Matsuo Basho written in the seventeenth century: the last night of the month, no moon: / thousand-year-old-cedars besieged by a storm. Mr. Natsuishi’ poem inscribes within it what is essential to modernism: a proclamation of independence from tradition in the rejection of the earlier poem and its submissive posture to the grandeur of nature, yet simultaneously the preservation of that tradition in referencing the old poem in the new. The old style and subject is “abandoned,” yet devotedly retained. Mr. Natsuishi sets off on his own path in this poem, yet he strikingly adheres to Basho’s advice to poets to not imitate the ancient masters, but to seek what they sought. And what was it the ancient masters sought, if not an original relationship to nature.

Having abandoned the ancient loci of tradition, where has Mr. Natsuishi’s path led. Partly, his path has progressed along a road that has been in the building for the last century.  His haiku, like that of others in the twentieth century, has grown by including within itself a greater scope of subject as new terrain than the form allowed in its more formalized past. Mr. Natsuishi writes on subjects such as television, sex, newspapers, bureaucrats, electric wires, and cultures undreamt of by the ancients. There is nothing exactly new in this approach. Yet, Mr. Natsuishi brings originality to this process of inclusion in the art of haiku hitherto unseen.

At first sight, this poem strikes the reader as shocking in its use of incestuous imagery. Yet the poem in style is really quite conventional. Conventional haiku has been said to be the juxtaposition of images, whereby its two phrases so placed shed light on one another and thereby create a new, third element of meaning. This poem utilizes this technique in its manner and introduces no technical innovation. The images chosen are quite smart, though. For what is spring if not the lush, reproductive urge of nature that is so luxuriant as to overwhelm discreet human order. That is implied in the poem by a mother sucking her baby’s cock. The procreant urge of the world knows no borders, no negatives. This is further conveyed in the haiku by the categorical confusion in the phrase “sea of .leaves,” for sea and leaves, like mother having sex with an infant, are categories that do not properly belong together. If the reader realizes that Mr. Natsuishi does not mean the incest literary, but as the shock to decorum that is spring, then the poem would be better understood. Again, he conveys this shock of spring to the moral sensibility in the following: Assaulting/a formally dressed old woman/the wisteria. Spring, my friends, is not decent and we should not poeticize about it in saccharine terms.

A slippery sex organ
and another
give birth to gold

This poem without a seasonal reference is a good example of how Mr. Natsuishi’s aesthetic of using keywords-here sex-in its place can be used to creative ends. This poem can almost be said to be a meta-haiku, for the poem is about adding two elements and arriving at a third, which the poem utilizes in its construction. The adjective “slippery” is well-chosen: it gives the impression of seals swimming, of moist living beings playing together, and by association is indirectly associated with the waters of spring and life. The finale is fine, like alchemy. Out of our love, sloppy wet or not, comes the most precious element, gold. And, out of his devotion for this art of joining two elements till they fire into a third, Mr. Natsuishi is the archetypal alchemist.

He is also very sensitive. If you hold these two contrasting images contained in this poem in your mind, you would fairly burst with the hurt and beauty of the world simultaneously existing in you. Cherry blossoms, white or red depending on what kind, in appearance resemble the newsprint and blood conveyed in the second image. There is also a similarity in the texture of petals and newsprint. Of course, newspapers do absorb a tremendous amount of news about death and war all over the globe almost as if it were

natural, as if the absorbent quality of paper were responsible, or as if the medium were alive and thirsted for such tabloid material. If the two images are held in suspension, though, the tender beauty and gory nature of the world seem to hold one another in an embrace, each looking in the other’s face for love, explanation, and understanding, till the mind holding them together fairly screams for release.

He can also be crass and mystical at the same time, containing within himself the whole world (for what world is separable from the perceiving mind) and letting it fly out not able to hold it back anymore, somewhat like Walt Whitman who contained multitudes and miracles.

On television
a large root dances
Manhattan below zero

Or he can be incisive and detached, as an outside observer can be of a foreign culture. In sudden, deep freeze, the frenetic activity seen on television in New York City is much like a giant, exposed nerve or root retracting or twitching to keep alive against an unfamiliar threat. And New York City is and always has been unrelentingly stern and harsh to its inhabitants and all its sentient life: For three hundred years/blue black blue black/New York.

But, he is always immensely inventive and deeply aware of what is the essence of haiku. Here, we have a poem that neither caters to the syllable count of classical haiku nor to its requirement of a seasonal reference. Yet, the result is haiku par excellence. ”Darkness,” another use of the keyword concept of Mr.Natsuishi, is a universal experience, as meaningful to human beings as are the seasons and as rhythmic and recurring. This nocturne relies for its force on the phrase “pharaoh’s dog,” and what better expression for darkness than reference to a dead culture and an animal deity, Annubis, who led the souls of the dead to the underworld. The poem uses allusion well and by this device gives depths to darkness that is surprising in a poem of so few words. It is a poem lovingly painted with the black of hieroglyphs.

He is finally truly tender and loving. This poem of absence conveys in few words a man’s true feelings towards his mother. Indeed, the sentiment the poem contains can be said to be the experience of all grown men towards their mothers. What was the fond source of all future unfolding becomes invisible, no longer present. An “estuary,” small but feeding the greater rush of life towards the boundless world, there somehow, lending its influence from the beginning, but lost as it joins the rest of time, and dearly remembered. I do not know if Mr. Natsuishi’s mother has passed on, as the poem may suggest, but in the life of a man a mother is always a poignant absence that cannot be found in the light of day.

Besides the many poems contained in this book of modern haiku, the editor, Mr. Jim Kacian, has included a number of interviews and addresses featuring Ban’ya Natsuishi. This inclusion of the prose pieces of Mr. Natsuishi is perspicacious and adds an important dimension to the work. It affords those readers who are unfamiliar with Mr. Natsuishi a chance to hear his remarks on the history of haiku, to hear him comment on the difference between seasonal words used in classical haiku and his own creation of a replacement for it in the concept of keyword, and to hear his thoughts on the subject of modernism in poetry in general. Having read the poems, the prose pieces cast light on them for the reader, and the poems can then be reread in a new light. The structure of the book is much like a haiku, two parted, with each section contributing towards a synthesis.

We are grateful to Mr. Natsuishi for this work and for Mr. Kacian for making it available.

A Guide to World Haiku

A newpaper article on Ban’ya Natsuishi’s new book “A Guide to the World Haiku”, 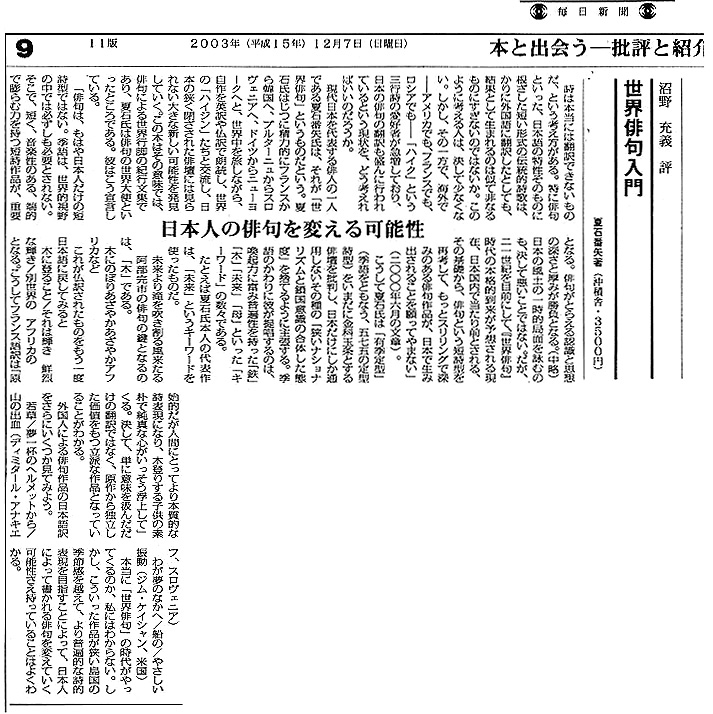